Taipei, you touched my heart


Wherever you go, go with all your heart. - Confucious.

Travel is always a good idea for rejuvenating the mind, the soul, and for new ways of engaging with the world. But traveling to totally foreign lands, where one lacks the vocabulary to understand the simplest of things, like road signs or even readymade foods can become an exercise on self observation and reflection. I was in Taipei last week and it was a singularly unique experience.

Taipei is a city of nightmarkets, scooters and majestic views. This being my first visit to Asia, I came expecting to find all that is different and unfamiliar but was surprised to find something curiously familiar. The back streets lined with timeworn apartment buildings, decked out with lush, green plants looked lovingly lived in. With charming architectural details like metal doors and traditional roof tiles and finials, the modern city streets revealed to the casual tourist this was Taipei as opposed to Istanbul or Athens. 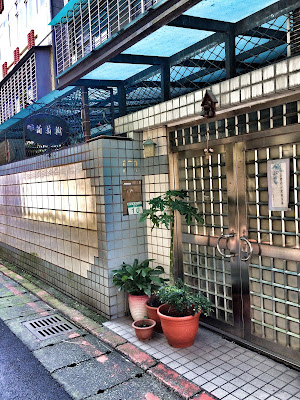 There is a serious cultural heritage built around food in Taiwan - I was told "Even Italian food tastes better here". Considering the fresh ingredients that are available at every corner of the city and the tradition of preparing everything fresh, from scratch, the superior quality of everything edible should not come as a surprise.

One of the biggest tourist attractions close to Taipei is the Yingge District, located in New Taipei City, 30-40 minutes drive from city center. The area is famous for its ceramic and porcelain production as well as studios and shops specializing in arts and crafts. Even the restaurant we dined in was an experience in artful elegance.

Fugui-Yingge is a gallery/restaurant located on Yingge Old Street. With some of the most elegant displays of art and sculpture, it is one of the most beautiful spaces I have ever encountered. Although everything in it is in Chinese, their website is worthy of a look (link) The food, presented in a very stylish way was good and offered more modern (western) interpretations of Chinese cuisine. Although the meal is very enjoyable, there is a very serious dilemma in dining at a restaurant such as this since the food stalls right outside are too tempting by far.

From small neighborhood shrines to majestic temples situated on mountain tops, Buddhist or Taoist temples crown the landscape in and around Taipei. Although the theological distinctions between the two are so blurry that I was told by the locals it would be something only theologians could decipher, my super simple interpretation is that the Buddhists pray to Buddha while the Taoists honor their ancestors.

A visit to Lungshan Temple, located in the Wanhua district, very easily accessible by subway (only a couple of stops from city center) can provide the foreign visitor not only a glimpse of the way Chinese temples are built, decorated and utilized but also a great understanding of Chinese religious tolerance. Inside you will find shrines dedicated to the Buddha as well as the many gods, goddesses and ancestors that the Chinese honor and pray to.

The original temple was built in 1738 by immigrants from mainland China who were the followers of the ancient Lungshan Temple in Chin-chiang county of Fukien province, as a local branch in Taipei. The building that stands today was built between 1919 - 1924. 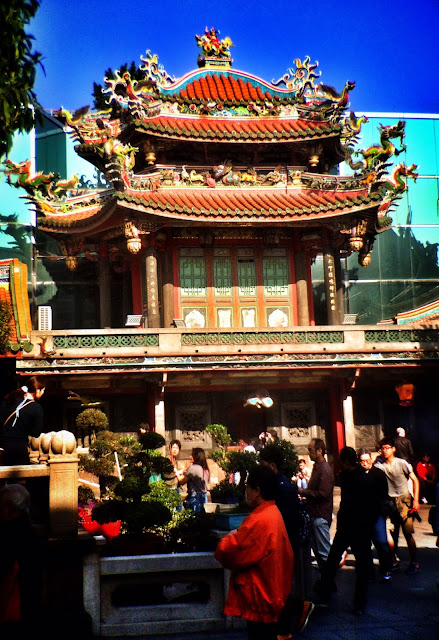 This is very busy, crowded temple with people praying to Buddhist deities as well as Matzu, the Goddess of marine voyage, Gods of literature, and even Lord Kuan, the God of war. I was told that the temples outside of the city are usually either Buddhist or Taoist but temples near marketplaces and centers of town tend to be mixed to accommodate all the people working in the area.

There is a street adjacent to Lungshan temple, Lane 224, Herb Lane, a market since the Qing dynasty that still retains its original width and vendors that look and work as they did since then. Visiting Herb Lane is a scrumptious experience with wonderful smells and colors in a simple lane packed with all kinds of plants and herbs. 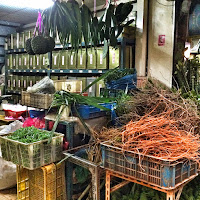 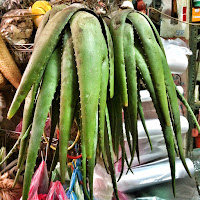 The National Palace Museum in Taipei is an encyclopedic museum of Chines art and culture with only a small selection of rare works on display. It is a vast museum that I could spend days in if given the chance. The treasures of the Chinese royal family were moved to Taiwan from 1948-49 for safekeeping. Of the five shiploads of treasures only one remained in China while the rest are in the collection of the National Palace Museum.


Chiang Kai-shek Memorial hall is a a national monument that is dedicated to the President of the Republic of China, Chiang Kai-shek. It is a vast square surrounded by a monumental gateway, the National Concert Hall and the National Theater  and the main memorial that also serves as a convention center.

Dadaocheng is a very interesting historic district in Taipei. An important trading port in the 19th century, it was home to tea-traders starting in 1851. The most famous street in Dadaocheng named, Dihua Street lined with stores selling dried goods, herbs and local products is reportedly the oldest street in Taipei.

Walking around Dadaocheng, one should utilize all their senses. The whole area is a cacophony of smells, colors, tastes and sounds. What was once the homes and stores of wealthy families involved in trade, are being restored and utilized in many interesting ways.


The beautifully restored store fronts are home to cafes, teahouses, galleries as well as many unique shops. A trip to Dadaocheng provides great opportunities for shopping and a feast for the senses that is seeped in history. Taipei is a relatively new city, having been developed mostly after the 1950's, but Dadaocheng was able to provide what felt like an authentic experience of the city's history which was a great way to end this memorable trip.

I went to Taipei with an open heart and left feeling its magic in my soul.