Unplanned and Unprepared, 24 Hours in Edinburgh and how an App saved my life 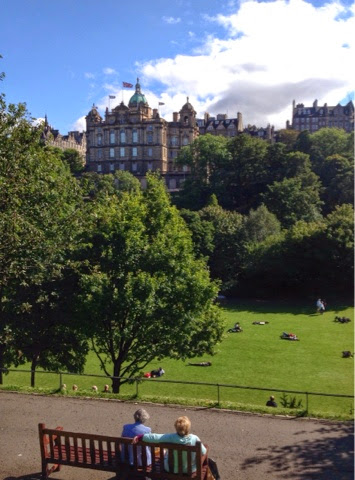 My plane landed on Edinburgh airport at 10.00am on Tuesday morning, I was supposed to stay for six hours before boarding a flight to Istanbul.  My plan seemed simple enough, take any transport out of airport, go to the National Gallery, look at art, look at the scenery of the city, get back to the airport, and take plane to Istanbul. 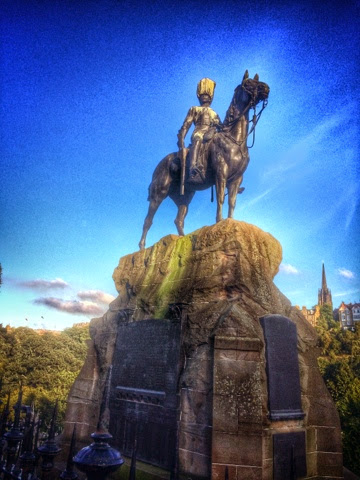 As it turned out, it didn't exactly work out the way I had planned... I had been so busy prior to my departure that, I did no research about Edinburgh or even how to get into the city. The only preparation was to send out a question via twitter to see if anyone had any suggestions... they all came back with the same answer - the National Gallery! Well, the National Gallery it was then. When I boarded the plane, I asked nice lady with the Scottish accent sitting next to me if she was from Edinburgh and how I could get to the National Gallery from the airport. She was traveling with her family who lived outside of the city but after they a brief deliberation, they told me there were busses that took you to city center. As it turned out, there were also signs in the airport pointing the way to the bus that went to city center - Bus number 100, leaving from stop 19. So simple. 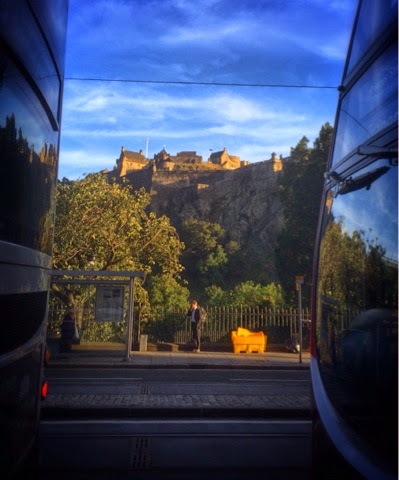 I exchanged my money at the airport and got a ridiculous exchange rate Pius commission where I only got £28 for $60, but now I had money to get on the bus, which cost only £7 return (round trip). I was told to get off at George Street and ask for directions, so I told the driver I had to get off at George Street. The bus ride which takes about 40 minutes (give or take 10 minutes) is itself a lovely ride. Once off the bus, the National Gallery was practically around the corner. 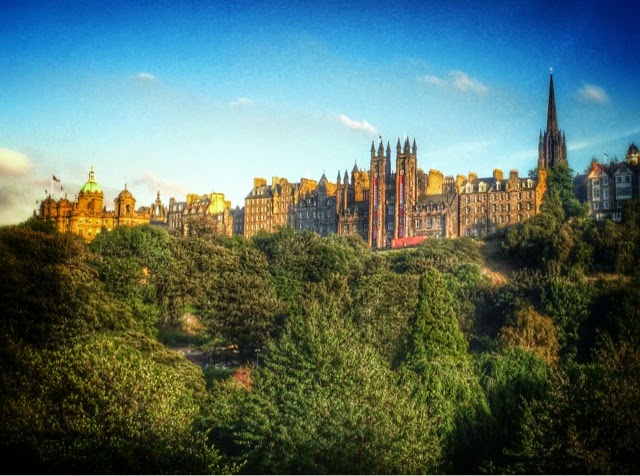 What first struck me about Edinburgh was the intensity of its green... The grass had an emerald-like hue that lived upto what I had dreamed of Scotland to be. Then there was the architecture that made the whole city feel like a set for a historic, costume drama. And, once you get into the city center, there is the castle that you see from everywhere. I am really big on views, so I just loved the prospect of seeing a castle sitting atop a hill commanding the whole city.
And then there was the art... 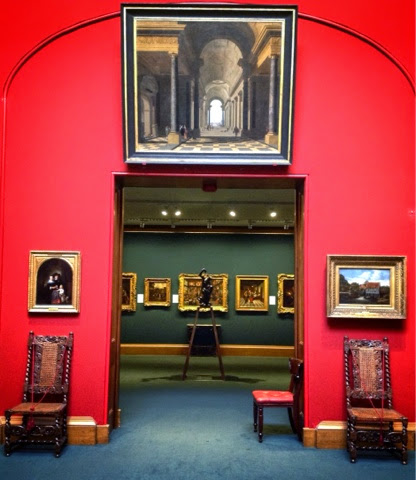 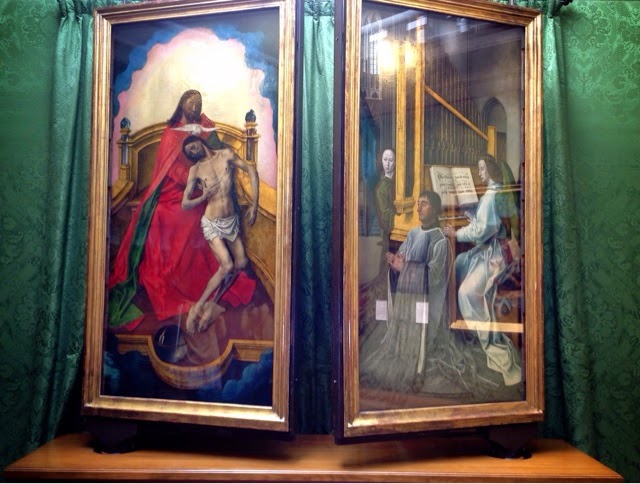 Each room contained countless masterpieces displayed tastefully. The Collection was so impressive, I couldn't help but wonder who put it together. 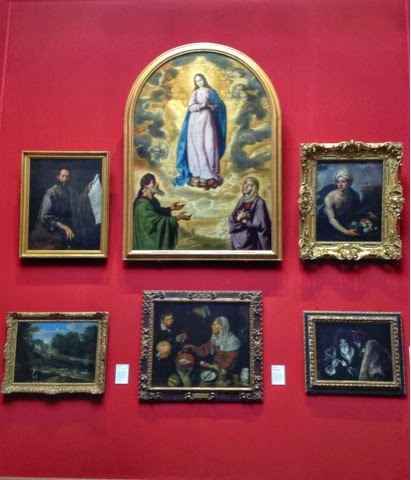 A respected art history scholar once told me that if you are interested in art, you are shaped for life by your "home museum", which made me wonder about the people whose "home museum' was the Scottish National Gallery. 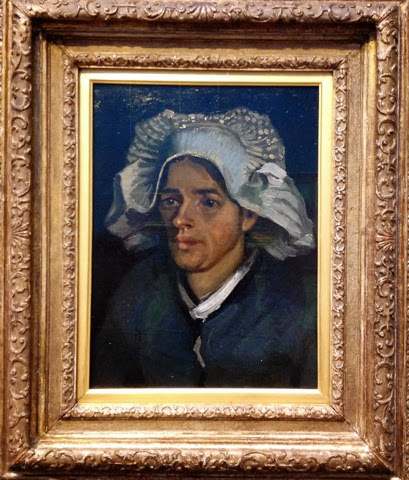 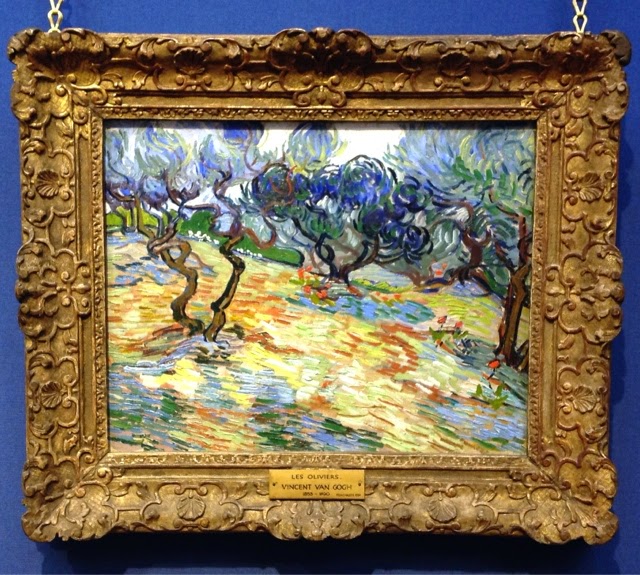 Vincent Van Gogh, Olive Trees, 1889
How would the perception of someone seeing Van Gogh's Head of a Peasant Woman and Olive Trees differ from someone who is formed by seeing Starry Night or Sunflowers?

Paul Gauguin at the Scottish National Gallery
The Vision of the Sermon                 Martinique Landscape.        Three Tahitians
Just as I was leaving the galleries I saw the postcard of John Singer Sargent's Lady Agnew of Lochnaw and couldn't believe I had missed it. So, I asked the very nice gentleman at the information booth if the painting was on display. This was the beginning of a wonderful conversation... 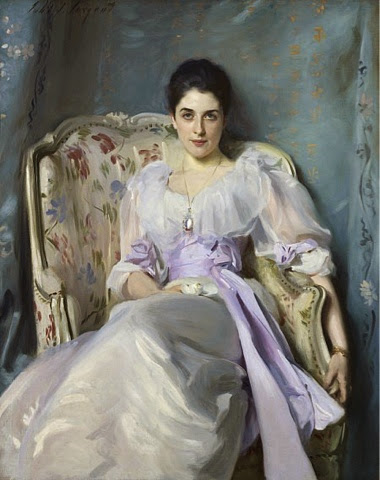 John Singer Sargent, Lady Agnes of Lochnaw, 1892
The gentleman informed me that I had not missed the painting since it was actually on display at the temporary exhibit, American Impressionsim, A New Vision, 1880-1900. Then we got into a lively conversation about American heiresses marrying titled lords and money, prestige, saving estates with large fortunes and impeccable manners... He told me stories of going to visit his American great-aunt who had married an English Lord and eating cucumber sandwiches at her London flat where she received callers. I was mesmerized. If only I had more time... 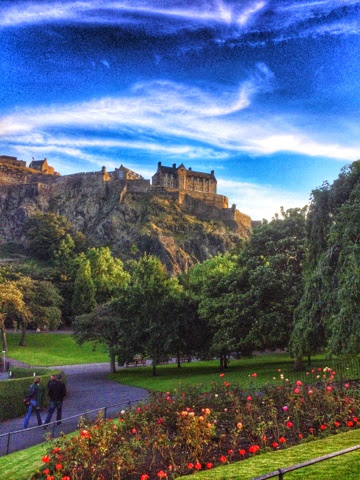 I had to run out of the museum to catch m bus back to the airport. Unfortunately no amount of running was going to get me on that plane, since thinking that my flight was at 6, I arrived at the airport at 3.30. But it turned out that my flight was at 16.00 (which is actually 4pm) and by getting stuck at security, I completely lost my chance of getting home that day. 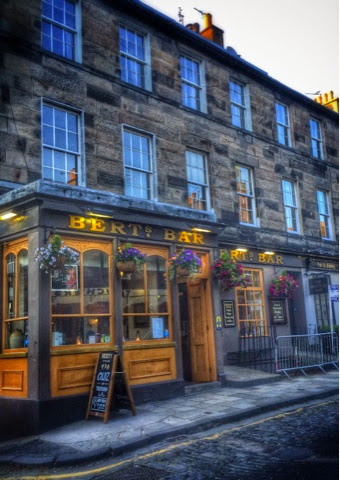 United Airlines rebooked my flight to the next day and my only prospect was to find a hotel room for the night. The ground crew for Turkish Airlines were very nice and helpful, they let me use their phones to call United Airlines (since United didn't have any more flights, everyone had left already) and then they called the airport Hilton to get me their special price - £286! Luckily I had the Hotel Tonight app on my phone and was able to find a room at Tune Hotel Haymarket for just $97 in a matter of minutes. The hotel room was tiny but ideal since it was literally right next to the bus stop where I got off from Bus number 100. 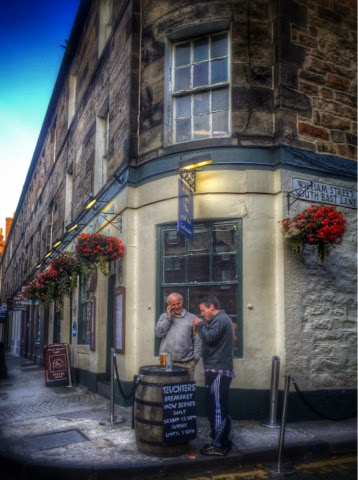 I bought myself another return ticket to city center and headed back to Edinburgh once again. I was planning to exchange money in town this time but ran into a problem, I hadn't anticipated. By the time I checked in at the hotel and was back outside it was around 6, and all the places that exchange currency were closed. I started walking towards city center (Princes Street) where all the historic sites and gardens that provide great views of the castle. Lucilky I am not afraid to talk to strangers and I askd a young lady sitting on a park bench if she knew where I could exchange money. She told me I probably could at Debenhams on Princes street but they closed at 6.30 or 7.00 pm... It was 6.35, time to move! 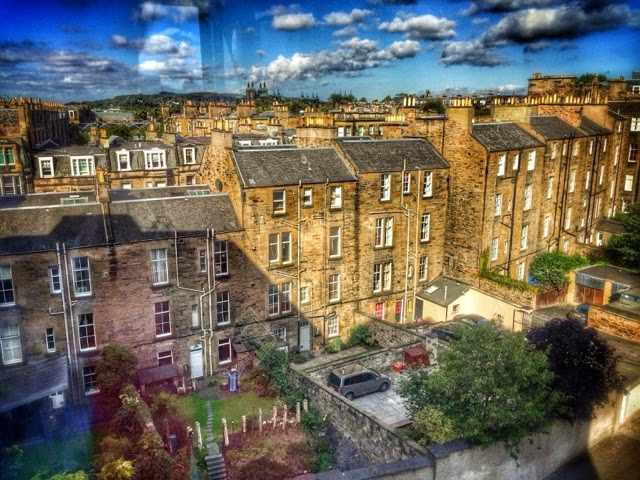 I made it to Debenhams in enough time and exchanged $60 for £33 this time. After this little excitement all I had time and energy to do was to just wander around the streets from Princes street towards Haymarket and my hotel. I had no map and no idea of where I was so I just stuck to the streets that ran parallel to the Main Street that the buses used - this assured I couldn't get lost. 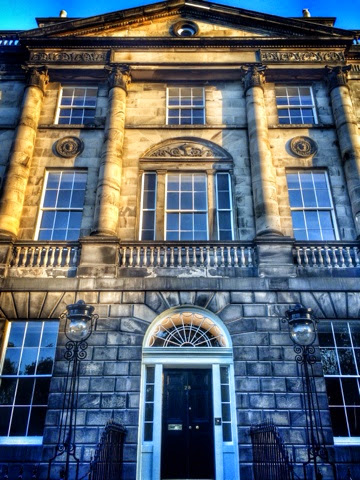 I went into the pub right across from my hotel and had their drink and diner special for £9 - Fish and chips and Nicholson's Pale Ale. I am not a big fish and chips person but this was truly amazing and after drinking the smooth beer recommended by the bartender, I decided that for years it was not beer that I hated but American beer that I hated. 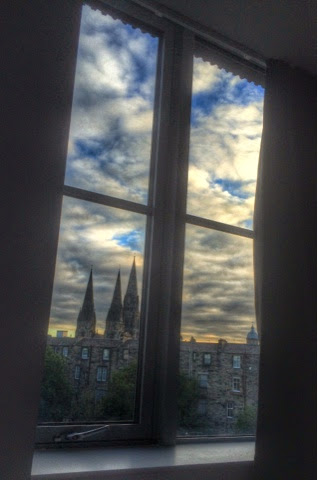 After waking up,to this view in the morning, emboldened by my experience from the night before, I decided to try a Scottish breakfast, haggis and all... I was pleasantly surprised, although I didn't care for the blood pudding, haggis was not that bad... It actually tasted kind of familiar. I think it reminded me of some of my parents' hometown delicacies from Kilis.
My recommendations for a trip to the unknown is to just relax and go with the flow. Talk to people on the street, on the bus, listen to them, you may find out some interesting facts, hear some fascinating stories. Try their local delicacies, ask them about the ingredients, how it was prepared. And be prepared for any eventuality when you are leaving the house - if I didn't know about Hotel Tonight app, this trip,would have ended up being a major expense.  Although unplanned and in a way unwelcome, my Edinburgh adventure turned out to be quite nice.
Posted by Sedef at 11:41 AM