I was in the city yesterday in order to participate in Slow Art Day, a day designed to promote looking at art slowly. It is a very simple concept really... looking at a work of art for ten minutes and really seeing... not what the curators or anybody else tells you or wants you to see but what you actually experience if you allow yourself the time to see. 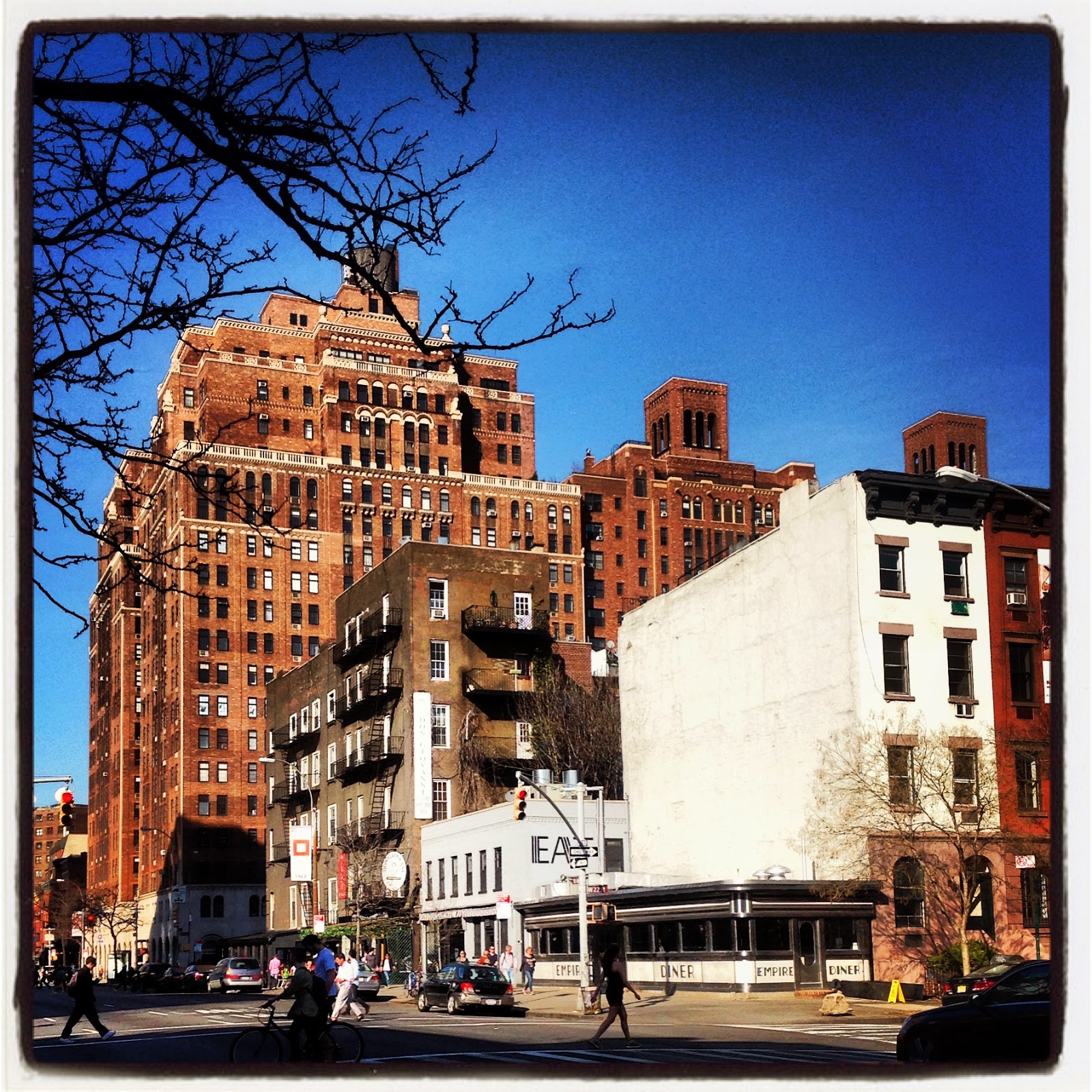 The gallery which participated in Slow Art Day in Manhattan, itmarksthespot, was located in the heart of the gallery district in Chelsea. Just the location itself led to a brand new experience full of zestymoments for me. I am an art lover who goes to art museums in New York City and takes time to really look at art regularly but the opportunity to be part of a movement such as this and maybe even find a new way to experience art was too appealing to resist. 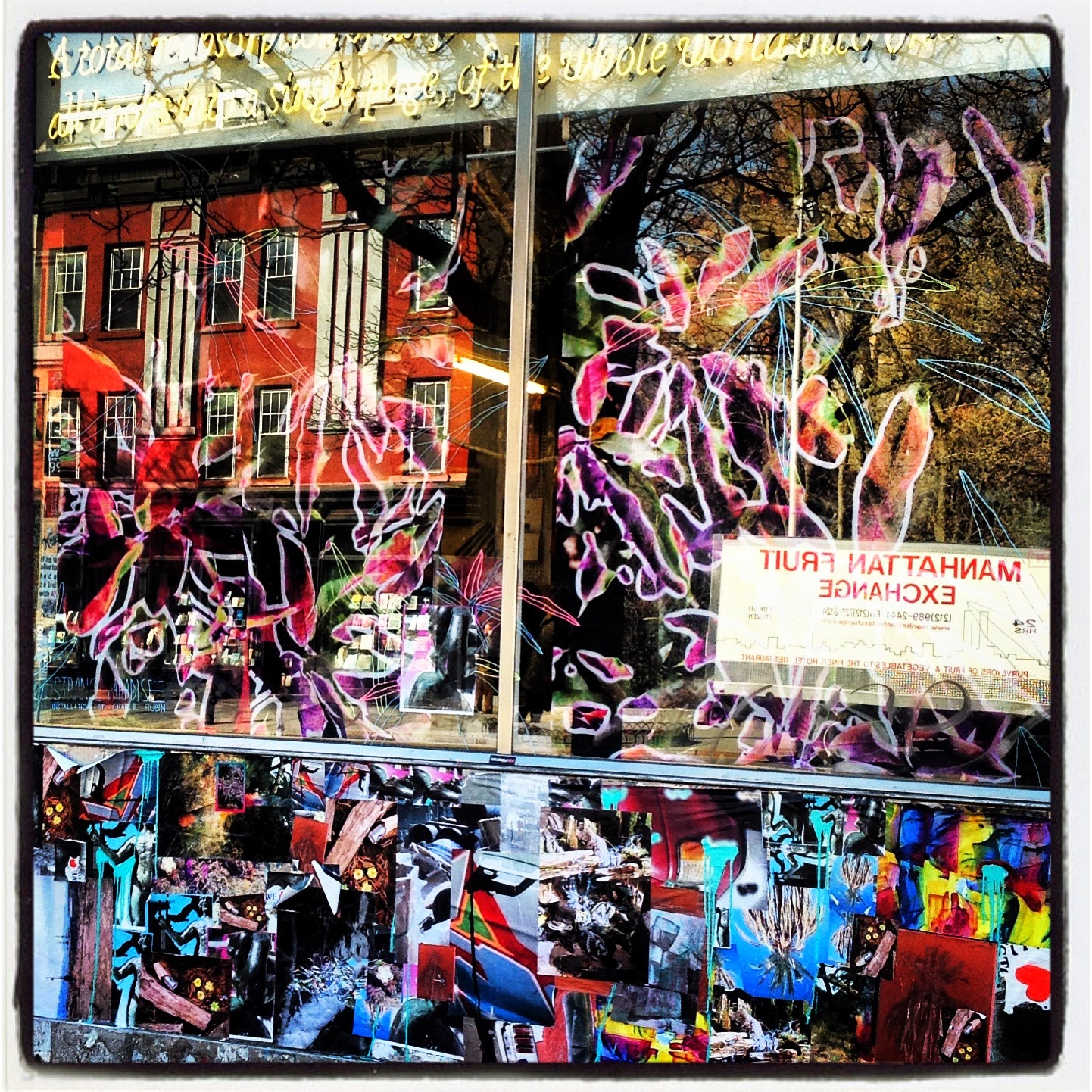 The director of the gallery, Eileen, had chosen five works of art from three different artists to share with us - Anneli Arms, Jacqueline Sferra Rada and Stuart Rapeport.

The three things I learned from Slow Art Day 2014 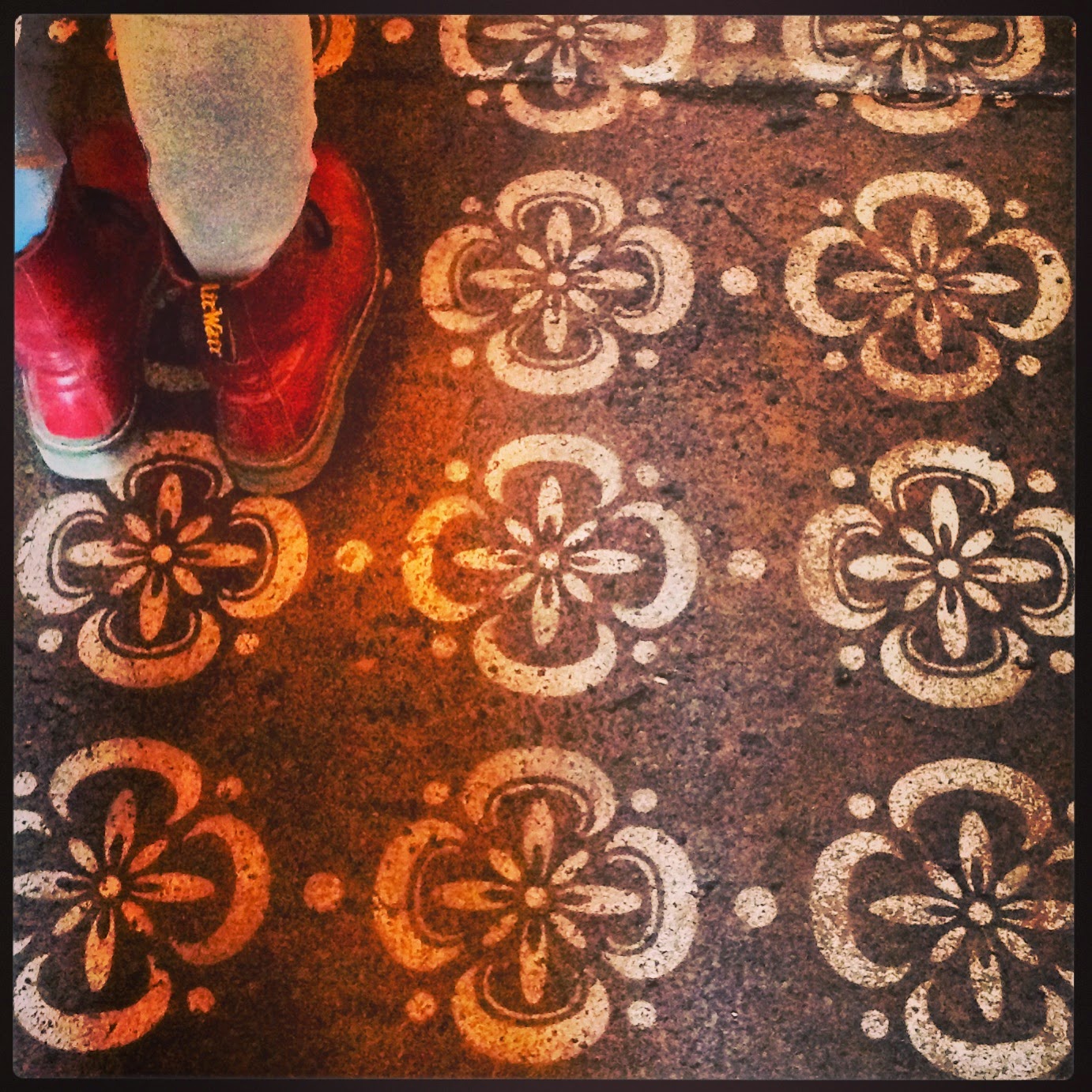 
The titles, a brief introduction about the artist as well as the subject matter, if available, were also provided before we saw the work in question. This brief information affected my observation and thought process about the art. Although I am always very curious about the culture surrounding the work and the artist in question, in this instance I realized it took away from the experience. I wished I had less information rather than more so that it could have been a 'purer' experience.

Matting and framing have the power to make of break a work of art...


One of the works was an acquatint print on paper which was matted and framed. I couldn't get past the idea of releasing it from its frame. The more I tried to concentrate on the work the more distracted I got. Although it was white on white mounting with a simple black frame, the frame left more of a memory than the work did.


I can engage with abstract art!...

We viewed two works by Jacqueline Sferra Rada and I was quite surprised to find how much I liked them and didn't want to stop looking. After contemplating her Swimmers for five minutes, I realized that the recognizable elements in the work were completely forgotten and I didn't care. I wasn't trying to make sense of it or understand it, I was just in the moment and feeling ... a sense of serenity. 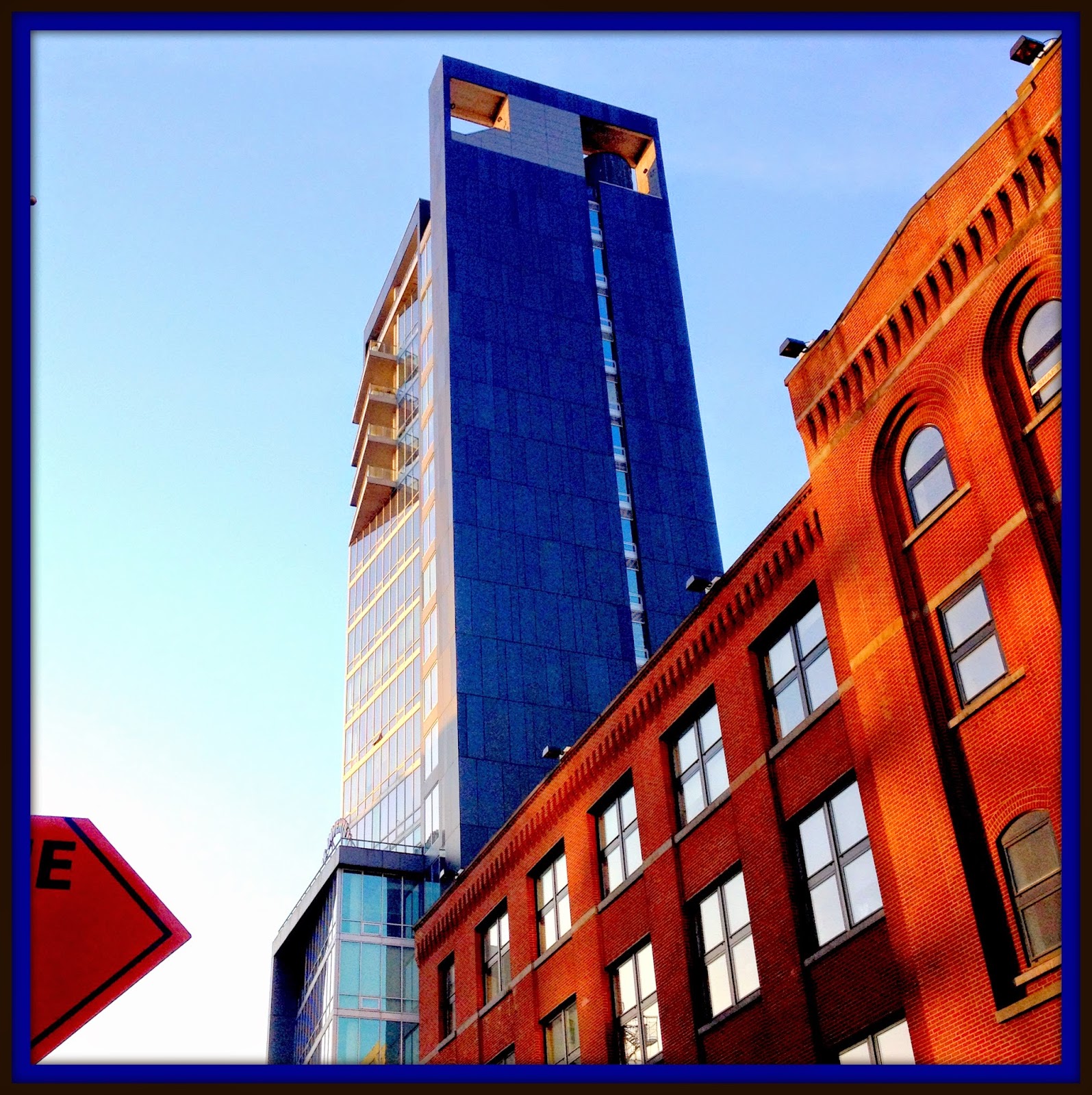 We had such a lively discussion after our Slow Art Day experience that we, seven complete strangers till about an hour ago, stood on the sidewalk taking about art, museums and the Mona Lisa after leaving the gallery. It turns out the couple who identified themselves as non-artists went to the Louvre recently and seeing the Mona Lisa was one of their worst experiences... they said "but we did see some really great art there!" They insisted seeing one of the greatest masterpieces from a distance, behind a glass case and a selfie-taking crowd was not their idea of contemplating art. Quite the opposite of Slow Art Day...

It was such a gorgeous day and I was in the middle of so much art, I decided to just stick around instead of rushing uptown to one of my regular haunts... MOMA, the Frick or the Met. Chelsea is a great neighborhood to just stroll around without a plan or purpose, being in the moment. It turned out to be a very relaxing, lovely day with quite a few surprises...

One of the galleries I walked into quite randomly turned out to have a show by a Turkish artist, Irfan Onurmen. I am ashamed to admit, I had never heard of him... my bad, since his work is in Istanbul Modern as well. I can't wait to go to Istanbul Modern just to see his works next time I am in town. Irfan Onurmen's art just draws the viewer in and demands your attention. The multiple layers, even in his oil on canvas works, does not allow the viewer to just be a passerby, they create a need to enter the work and explore, deconstruct it to its bare forms even knowing there will be nothing but plain shapes and lines. Gallery C 24 website has all of the works on display... one of my favorites was Listening, 2013. 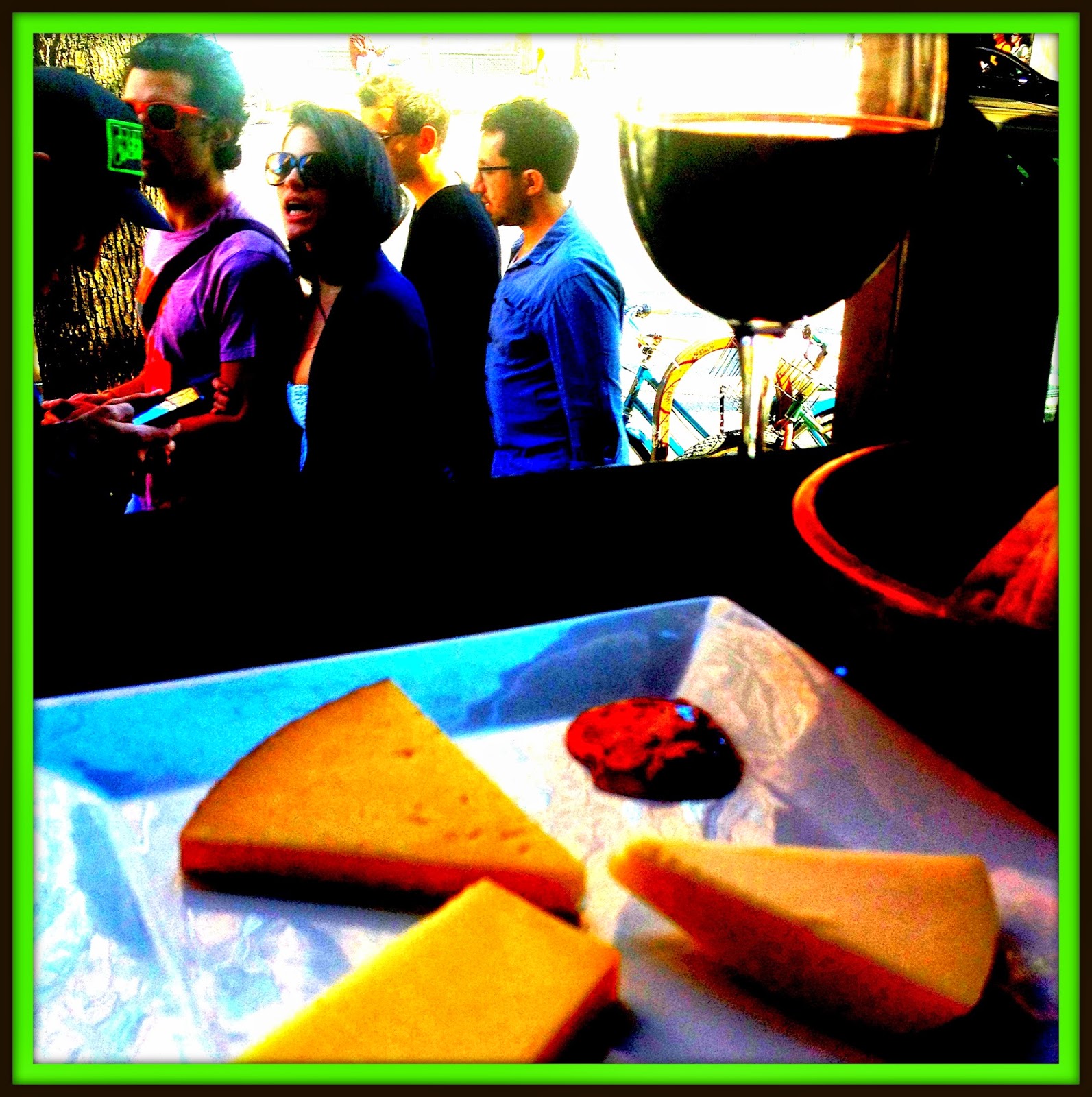 I can't recall the number of galleries I walked into but it was so many that after a while I was really tired and needed a break.  Of all the cafes, restaurants and bars I could have walked into I had to walk into The Drunken Horse... one look at the menu and I knew the owner was Turkish.  It is actually a charming wine bar with a nice selection of cheeses from around the world... but also some Turkish appetizer as well. Everything was quite nice for about an hour until a guy with huge headphones came in, sat behind me and started having a very private conversation with his buddy on the other end of the line.  I knew it was time to leave. After a bit more gallerying, I decided to make my way back from the High Line. 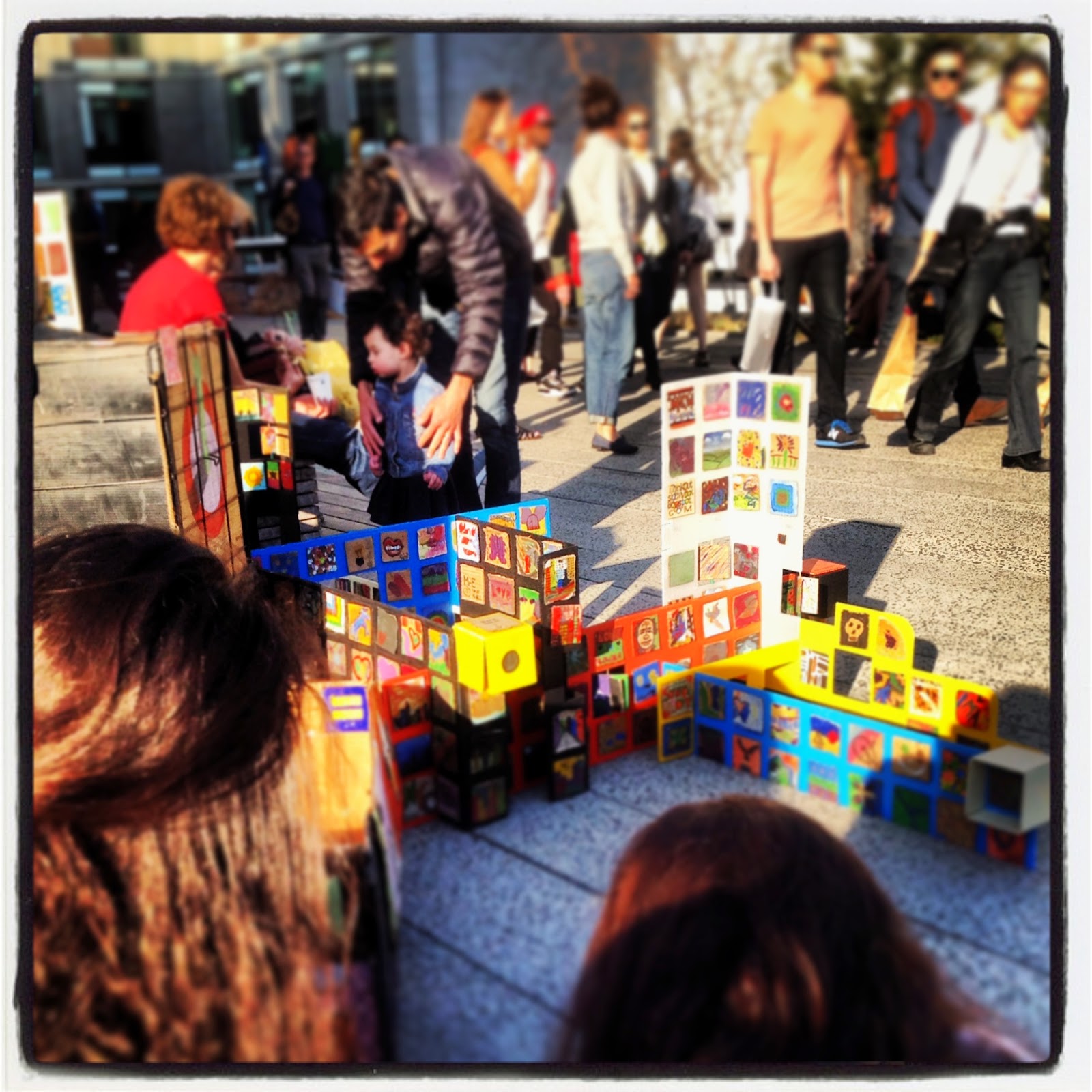 High Line is a golden example of how a city can re-purpose an abandoned industrial site to create a space where the community as well as visitors can both benefit from it. It was an abandoned railway line which used to provide transportation between the warehouses that were the point of entry for all food supplies for New York City; now it is a brilliant park which was packed with people walking, taking pictures, and ... making art! This is where I found I think outside my box a community engagement art activity that should be in museums!

David Everitt-Carlson is a one man activity center/ activist who provides anyone interested in participating with paints and a 3x3 cardboard square to create whatever they are inspired to do. He has over 1,200 paintings that have been created by visitors to his smartcart since 2011.  It is such an phenomenal project that all I can say to explain is "You have to see it for yourself!" There was one little girl, Pema, who lay on her stomach for a half hour, moving from one side of the exhibit to the other, trying to see it all at eye-level. My thought was - What a great dollhouse this would be... I think I will try to build one for my little niece as soon as she is a little bit older.  As I watched grown people sit on the ground and paint miniature works of art and Pema's fascination with what was on display, I was imagining something like this in MOMA or the Guggenheim.  After asking Pema which one was her favorite and establishing it was the star, I decided to paint her a star to take home. So, I sat on the ground and painted a yellow star for a 20 month old girl who definitely has an eye and a heart for art. It was the perfect way to end a day dedicated to experiencing art slowly.

IT MARKS THE SPOT
http://itmarksthespot.tumblr.com