The Intangible Heritage of the Thanksgiving Table

We gathered, we cooked and we ate...now that everyone has gone home, it's time to reflect.
Whenever I think of Thanksgiving, I think of Norman Rockwell's painting, Freedom from Want; in my mind's eye, it is the perfect visualization of one of the most meaningful days of the year. The one day it is a requirement to give thanks for all that we have but that's not the only reason Thanksgiving is special... Thanksgiving is also a unique and wonderful holiday for not excluding anybody on account of race, religion, nationality or social status. Everyone can have Thanksgiving, the main idea being, if you made it here (on American soil) you can join in. 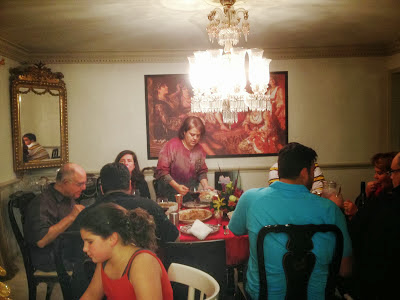 But the more important question in my mind today is - do people's tables actually look like this? Contemplating the iconic image of the fresh, smiling faces of the wholesome Americans sitting around the big table set with grandma's best china and linens, everyone looking at each other with joy and genuine affection makes me wonder if this is "real" then how do we fit into the typecast? I recently found out, thanks to Deborah Solomon, that even Rockwell's own life looked nothing like this painting, so I am going to venture to say that it's only normal that ours does not either... 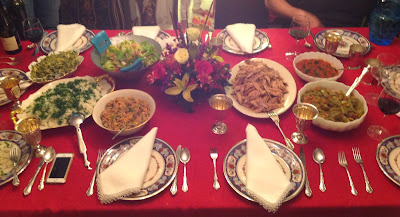 This is what our table looked like this Thanksgiving. I just realized that we forgot to take a picture of the whole family gathered around it since we were so busy trying to get everyone to sit and start eating. Although we set up a nice table with linens and flowers, I could not find one shot that would do it justice. Normally, I would not put up pictures that I didn't consider to be upto snuff but I think these actually capture the moment better than any perfectly setup, framed and touched up photo could. Because family gatherings are actually chaotic and messy and at times volatile... which makes it all the more special. 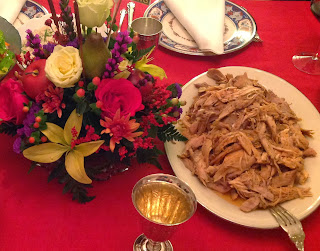 The turkey didn't make its grand entrance at the table nor get the photo-op it deserved... but it was good to the last bite (no left-overs). Then there were the rest of the dishes which, I am proud to say, were surprisingly, very healthy. Vegetables and grains... from different regions of Turkey, fried green beans and egg from the Black Sea, Kisir (Bulgur Salad) from Southeastern Anatolia, green beans cooked in olive-oil from the Aegean, Muhammara (hot pepper dip with walnuts) from my parent's hometown Kilis, and rice with peas and dill which could be any region of Anatolia... accompanied by Coppola wines from California.

As for the deserts... my cousin brought the ultimate American dream, Pumpple (two different layers of cake with a pie in the middle) from Philadelphia, my mother came with Turkish delights, sweet sucuk with walnuts and pestil (fruit leather) from Turkey and for the piece de resistance... a birthday cake Pro and I prepared for my father.  And no, it was not his birthday - during story-time Pro and I saw a very colorful cake in Curious George and Pro said he wanted a cake just like it, so I decided we had to make it. The happy coincidence of not having a specific birth-date for my father except "the time when black grapes were eaten," has given us ample opportunities over the years for celebrating the happy occasion whenever we feel like it. 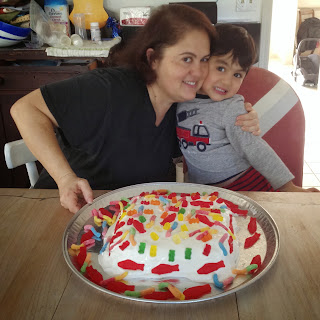 As Pro and I made the carrot cake from scratch, whipping the cream cheese frosting and than decorating it with gummy bears and jellyfish, I was thinking of a UNESCO video I had recently watched about the French Gastronomical Meal being included in the intangible heritage of humanity. No one can deny the culinary delights of a French Gastronomical meal but singling it out as the intangible heritage of humanity is a question open for debate. The family meal, prepared with love and consumed together has to be the most basic of human traditions belonging to all the people of the world... just like Thanksgiving belonging to all in America. 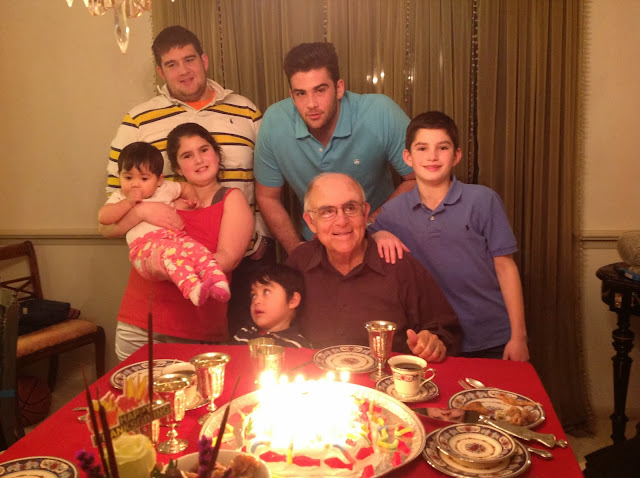 So, we had Thanksgiving, and we were quite a mix around that table... Turkish, Chinese, Jewish, American and even a bit of Irish, some of us born and bred on these lands, others coming from far away places to make it their home. We had food, merriment and out-of-focus photos with everyone looking in different directions and babies already in their pajamas, around a table which was left a happy clutter of all the good food and lovely memories that had suffused it.  It may be a far-cry from the Norman Rockwell painting but very 'real' none-the-less.

If one is to consider 1943, the year Rockwell painted this work, the pain and suffering that was in abundance all over the world, the image becomes more poignant. Although for Rockwell and his audience the Great Depression was probably uppermost in their minds. They probably needed such an image to reassure themselves that it was going to be OK, they would see better days. This Norman Rockwell painting in my opinion is the visualization of the intangible heritage of America - The Thanksgiving meal, traditions and living expression passed on from one generation to another, contributing to give us a sense of identity and continuity, providing a link from our past, through the present, and into our future, helping us to feel part of society at large.*

* UNESCO, "What is Intangible Heritage?"
Posted by Sedef at 4:28 PM