A Little Hideaway in the Karakoy district... 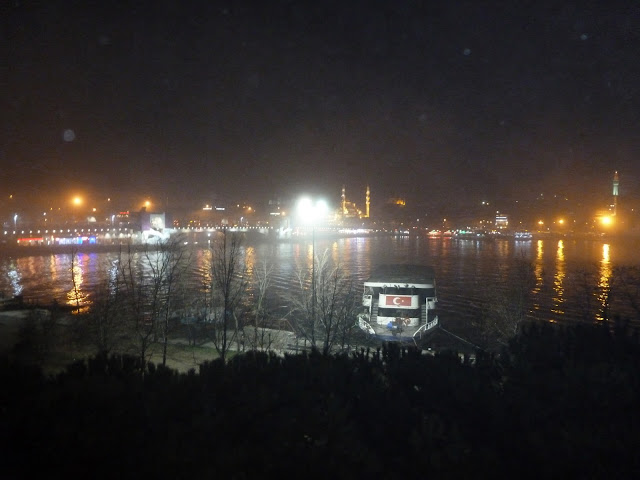 Istanbul is full of lovely seafood restaurants where you can indulge in tasty mezes and fresh fish from the surrounding seas and drink your raki while gazing out over a magnificent view that usually encompasses a body of water surrounded by undulating hills strewn with the remains or architectural masterpieces of the dynasties that were a part of the golden mosaic of this magical city.  In order for one to stand out over the hundreds of others it has to posses some unique quality that sets it apart from the rest... we found that unique quality in Hayat Balik...

The trip to get to the restaurant was half the fun since it is situated in an area that is full of shops for auto spare parts that look as if they have been there since the beginning of time.  This is an old part of town that is incredibly crowded during the day and almost totally deserted at night.  When we took a turn into the bowels of this unlikely neighborhood, following my husband's cryptic directions, I knew we were in for something special... Although we had no idea where we were going except in the direction of the Golden Horn, I was confident there was an extraordinary view involved with this dining experience.  After a couple of turns we ended up by the water and followed the path for one block to end up in front of a lighted entrance in an otherwise dark street by a rundown, little park by the water.  Arriving at night added a touch of Gothic Romance that my dramatic nature absorbed with pure delight. 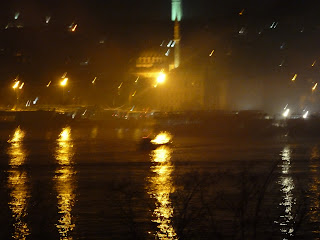 As we descended out of the car, we found ourselves on the side of the Golden Horn, directly opposite Sinan's magnificient Suleymaniye Mosque with a view of the Galata Bridge, New Mosque, Topkapi Palace to our left...  Upon entering the restaurant, we had to climb three flights of stairs to reach the top floor where they had prepared a special table for us...from that moment on we only had to choose which side we wanted to face the Suleymaniye Mosque or the Topkapi Palace.

The food was the usual, delicious Turkish seafood restaurant fare with one or two unique, hot meze additions. In these restaurants it is best to decide if you want to have fish or if you want to just have meze and order accordingly.  Otherwise it is too easy to get carried away with the rich array of mezes and never make it to the fish course.   The mezes we had at Hayat Balik were all very good but the hot mezes were especially noteworthy. Mostly, we followed our seasoned waiter's suggestions and we were not disappointed in the least.  The prices were moderate - around 60TL per person including drinks but almost no alcohol ( just two glasses of raki.) There is parking available in front of the restaurant but taking a taxi is probably the easiest way to get here, especially for those who are not familiar with Istanbul.

We were so happy with the evening that we can't wait to go back in the summer when the terrace is open and we can watch the sunset over the Golden Horn.  I am also a little obsessed with taking pictures of the incandescent panorama  in day light... Day or night, Hayat Balik offers it's customers a satisfying dining experience with enough drama to make it stand out from most of the rest... 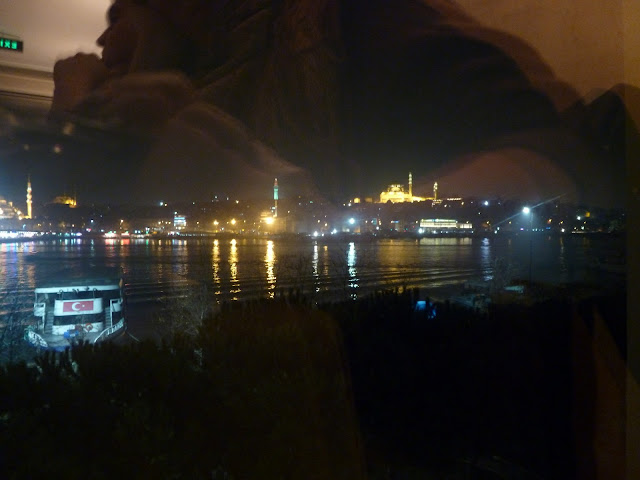